Before the Roman came to Rye or out to Severn strode,

A reeling road, a rolling road, which rambles round the shire,

And after him the parson ran, the sexton and the squire;

A merry road, a mazy road, and such as we did tread

The night we went to Birmingham by way of Beachy Head.

Saturday’s Club Run was not, however, via Birmingham or indeed to Beachy Head, it was to the well-known café at Pensthorpe Wild Life Park.  The route there did, however, have some resemblance to Chesterton’s poem – rolling around the County with a couple of fair sized hills for good measure.

Three club members met at Pretty Corner to be joined by three more at Itteringham Bridge. From there we back tracked to go via Mannington Hall and then down to Corpusty, where we picked up the back roads to take us towards Briston.  Turning off at Sandy Lane we made our way to Hindolveston and then Fulmodeston where we turned to ride down to Stibbard and then Great Ryburgh.  Here, all riders were challenged to ride up the Street, which consists of two very steep hills.  Their reward was a quick ride down to the Pensthorpe café.

The café was its usual excellent self – fast service and an extensive menu. After lunch we set out on the home run – losing David C but at the same time being joined by Scott fresh out from work.

Our route back was via Fakenham to Hindringham and then Sharringtom, Briston and then home to Sheringham.

Excellent weather – no wind and no breakdowns – bliss!

Just to mention that there was a two way split on the return leg at Edgefield with 3 heading off via Little Barningham to Erpingham where there was a further split as the 3 pedalled their own ways homewards!

Many thanks to Geoff for leading today’s run.

7 Wheelers lead by Alan left PC at the usual time on a cool but dry day for a ride to the North Coast.

Our route followed a familiar path to Matlaske and then Plumstead, Edgefield, Briston, Craymere Beck, Hindolveston, Swanton Novers and Briningham, just after which Andrew C had a rear wheel puncture. With the stopwatch running Andrew was making good time until that last few inches of the tyre which can sometimes and on this occasion did prove to be a bit difficult.

All fixed we continued on to Brinton, Sharrington, Glandford, Wiveton and finally the Coast Road for a high tempo last stretch to our lunchtime destination. 28 miles of glorious Norfolk lanes with just a hint of more major roads! We had obviously arrived at a good time as we had a choice of where we sat and the food came quickly. As we prepared to leave for the return leg the Pub had filled considerably.

Andrew C and Jane continued up Bard Hill and homewards while the remaining 5 riders made their way up to Wood Lane and then eventually to the Cley Road which took us to Holt. Shortly after crossing the A148 Andrew B left us at Hempstead. After Baconsthorpe Kevin left us at Geoff’s Corner and there was a final parting of the ways as Malcolm headed for Gresham, Aldborough, Erpingham, Felmingham and home while just the 2 completed the circuit back to PC.

Many thanks to Alan for leading today’s ride.

9 Wheelers gathered at PC to pick up one more at All Saints Church, Gresham to swell the group to double figures for the first time in a little while! Most were still dressed in their winter gear being perhaps slightly distrustful of the (apparent) return of milder weather, while a few preferred a combination of summer tops and winter bottoms or vice versa!

Anyhow David’s preferred route taking in Sustead was thwarted due to road works so the first part of today’s run followed a loop via Bessingham and Hanworth to Metton and onwards through Crossdale Street and to Northrepps (via Hall Road and Nut Lane rather than the usual New Road). A couple of unauthorised stops (one technical and one to receive a call from builders) delayed things slightly and David was a bit concerned about arriving late for lunch so decided to amend his route. We pressed on through Southrepps, Trunch, Swafield (where a local gave unsolicited advice on the best route to Bradfield), Bradfield, Antingham, Suffield, Colby and the final stretch against a stiffening breeze to Banningham. A very pleasant 26 miles!

CJ was tucking into his lunch as we arrived at The Crown but the service was pretty good and we were all eventually fed and watered. Robin had left us on arrival at the Pub as he had things to do. Having enjoyed a sunny al fresco lunch we began our return leg; John D peeled off just before Ingworth to follow Drabblegate homewards reducing the group to 8 members.

After Ingworth we then took the Scarrow Beck route to Calthorpe (thus avoiding the road closure at Erpingham), then Wickmere and Thurgarton just after which Malcolm headed off to Hanworth and homewards while the main group returned to PC and destinations beyond via Bessingham and Gresham.

Many thanks to David for leading today’s ride in temperatures at times exceeding 15 degrees and in the words of one “feeling like a summer day.” 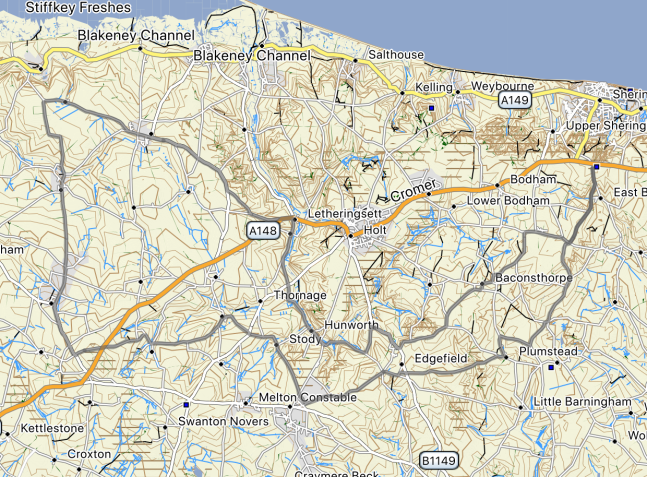 5 turned up on a windy but dry day for Andrew’s run to Langham.

We set out towards Matlaske but diverted to Plumstead then to Edgefield. On towards Briston but swerved right to Stody then Brinton. The road to Gunthorpe was dry but bumpy with strong side winds.

However after crossing the main road we were treated to a downhill downwind blast for 4-5 miles from Thursford to Binham. On to Langham via Cockthorpe making short shrift of the climb up due to the 30mph tail wind.

An excellent lunch with of a choice of three mains and a drink for £10. The quality was excellent.

Returning we slogged to Letheringsett then uphill and into the wind via Thornage and Hunworth. A short twiddle left took us briefly to the main Holt/Norwich road before turning left at Edgefield to Baconsthorpe and PC.

Many thanks to Andrew for leading today’s ride – shame I couldn’t make it!