Ten members were out in force for John H’s last club run (probably) as leader to a now regular club destination at The Olive Branch in Tunstead.  Having already racked up 30 odd miles John met three riders at PC and headed off into the wind to Banningham via Aldborough and Erpingham.  With a short delay due to a horse lorry blocking a back road and nearly taking out two cyclists and numerous people forgetting how to drive (Christmas spirit?) we picked up four more riders at Banningham.

John took us north and then east to Trunch, Bacton Woods, Dilham and to Tunstead. Despite no rain nearly all the roads were wet and muddy but at least it was mild and the pace was good.

Lunch was as good as usual and two more Wheelers met us at the cafe.  Mike Burrows also joined us arriving on an interesting looking carbon bike called ‘Gordon’ with an internal gearbox (see photo).  Deciding it was probably slower than our road bikes we decided not to speed off on it and continued on our way.  With riders departing like the fading sun we made it back to Sheringham via a longer route through Ingworth and Itteringham and waved goodbye to John who still had a few more miles left in him.

All in all a great send-off to John, who will be concentrating on time trial training next year.  Thanks to his efforts on the club runs over the last few years.

Happy Christmas and a prosperous New Year and I’ll leave you with a quote from John F Kennedy “Nothing compares to the simple pleasure of riding a bike.” 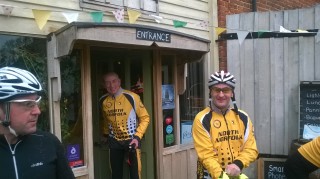 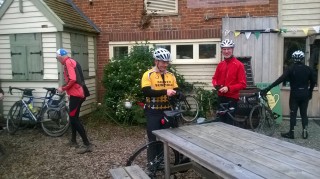