At a distinctly chilly and damp-feeling 10:30am 5 Wheelers set off for the day’s outing, with John D leading, to Jules Country Café at Alby.

Nobody had driven to the start so with everyone warmed up and a favourable northerly, but moderate, breeze it was a fast run down to Itteringham – 8 miles completed in less than 30 minutes. From here we turned left onto the pretty lane around the north of Blickling Park which took us to Ingworth. Crossing the A140 we turned at Banningham to take a lane seldom used by The Wheelers past Colby school and left for a short section of the Trans-Norfolk Highway. Shortly after turning left again we passed the Corvette garage to head up to Antingham and over the Bittern Line. Again we turned left, noting the long-closed Suffield Arms as we passed beneath the railway to Thorpe Market – where inevitably we turned left to go through to Hanworth and then (of course) two left turns to Thwaite and finally to Alby after just over 27 miles.

Here we were met by a waiting Chris K and Dave C – who rightly judged that our delay must have been due to a p*n*t*r* (This was Andrew, some 4 miles earlier – when it was noted that Norfolk flints were really the worst – and Yorkshire tyres were the hardest).

A substantial lunch – giant doorstep sandwiches and large baguettes (with chips) was consumed, and asthma in sportsmen was discussed of course, but as no one could think of the name of a Croatian cyclist in the TdeF we moved on to pondering the outcome of an entirely different sporting fixture later in the day.

Refuelled and with the sun peeking through we re-mounted, leaving Chris K to return alone via Thwaite Hill. Fed up with turning left we opted for a right from the café and then several more to take us towards Suffield and through Colby to Erpingham where our leader left. As no-one needed to return to PC, I guess several routes were taken to home and with the temperature now in the mid-twenties, hopefully incident-free and at an enjoyable pace. 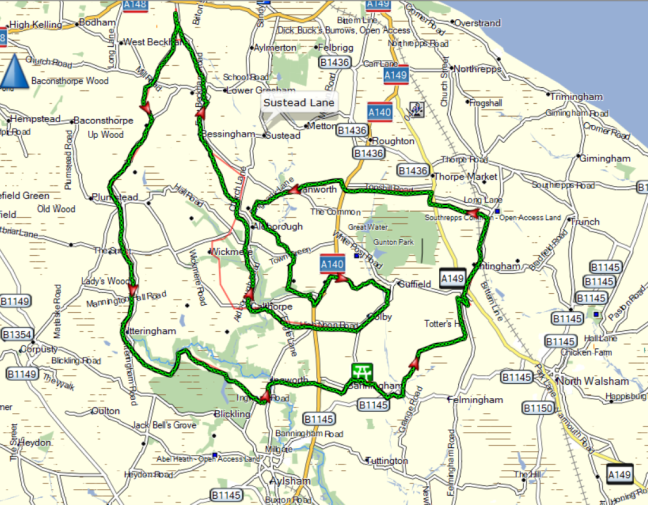 As you can see from the map we had the lunch spot (only 6 miles as the crow flies from the start) well-and truly surrounded. Thanks to everyone for a very enjoyable Ronde Van Thwaite-with-Alby!

One deflation but otherwise no incidents.

Had anyone returned to PC it would have been a 39 mile trip, though most will have completed around 50.